Read it in French: Le Gobi Or rather, the Gobi: desert steppes and deserts of stones, dunes and oases, ice throats and saxaul forests, Bactrian nomads and camels, dinosaurs and archaeological excavation sites, the last buttresses of the Altai lost between heaven and earth earth in a ballet of ocher, sand, basalt and azure. Immensity of emptiness and wind.
This fascinating region, where life is difficult to find a place, remains the least populated in Mongolian territory, at a rate of 0.3 inhabitants / km², and includes the largest number of protected areas due to the richness of its fauna and flora to the fragile equilibrium. It is the second largest biosphere in the world, with more than 80% of Mongolia’s endemic species, with more than 620 plant species and 52 mammals, eight of which are on the IUCN Red List, such as argali (mouflon), mazalai (Gobi bear), khulan (wild ass) or snow leopard.
The Gobi is the difficult passage of the caravans of the mythical Silk Road; it is the Lost World of Conan Doyle and its prehistoric decors of the times when man did not exist, or this princess in love with Mount Khangai, rich king of the northern countries of which she had three daughters, the Gurvansaïkhan Three Beauties.
And when the dune sings, beware: a sand storm is brewing …
To have :

MASSIF BAGA GAZARIIN CHULUU
The stone of the small place
A particular massif formed of imposing granitic formations (Terelj type, Khögnö Khan …)
– for the lucky ones: habitat of ibexes
– sacred paintings made by monks
– on the highest mountain of the massif, Baga Gazariin Uul: cave and lake / underground water
– in Ikh Gazariin Chuluu, further east: possibility of climbing on reservation One of the best known paleontological excavations in the Gobi! The famous fossilized dinosaur eggs were found in the 1920s by Roy Chapman Andrews, Indiana Jones of its kind. These eggs not only made it possible to establish that all the dinosaurs were oviparous but also inspired a certain Steven Spielberg for the Jurassik Park …
Although bones are increasingly rare on the site, Bayanzag has other qualities: its red ocher cliffs on this vast plateau are breathtaking; there go many families of camel drivers, between a strange restaurant in turtle and a forest of saxaoul.

VILLAGE BOGD SUM
Bogd is a small village on the northern edge of what we call the Gobi Desert. Located in the vast plain of the same name, this village of a few thousand inhabitants lives mainly from the work of felt, cashmere reputed Gobi goats, and agriculture.
Around Bogd, places of interest: the massif of Tevsh, famous for its petroglyphs dating from the Bronze Age Or Duut Mankhan, the singing dune … The Gobi desert must include only 3% of sand, and here they are gathered! Although this dune is not the largest in the country, it is still the most well known and visited. With its beautiful measurements of 180 km long and 8 to 12 km wide, the dune culminates at 200m height and is not so easy to climb! The view is only more beautiful and the magic descent.

MONASTERE ONGUII KHIID
Ruins of a monastery of importance of the central Gobi before undergoing the purges of the 30 ‘; its peculiarity is that it separates into two parts, on one side and the other of the banks of the river Onguii. The river has been dry for several years; a breeder then created an association collective called “Ongi River Movement”, counted by ASIA Foundation and registered with the UNDP, to counter the action of the mines on the course of the river that would have dried it.
– visit the ruins and walk through the rocky massif The capital of the eastern Gobi (Aikm of Dorngobi = 51,500 inhabitants, 109,500 km2), Saïnshand.
Meaning “the right source”, Saïnshand has a population of 21 175 inhabitants (census 2011) for just over 50 000 head of cattle. Located at 938m above sea level, the characteristic feature of this town is its division into two parts: one to the north, turned towards the railway activity of its station; and one to the south, comprising the main administrative institutions of the region.

MONASTERY KHAMARIIN KHIID = SHAMBALA
Khamariin khiid, one of the pearls of Buddhist architecture in the tradition of the hermitage of Tövkhön – or small monasteries in remote places, places of pilgrimage very popular. A peculiarity: unlike the majority of the monasteries and temples of Mongolia, this one belongs to the sect of Red Bonnets. The monastery counts “two sisters”; Ölgii khiid and Demchig khiid, both also in the Ömnögobi Aimag.
On the same site, one of the most important and sacred places of Buddhist mythology: Shambala, gateway to the kingdoms of the righteous, a bit like the Buddhist Eden. Very popular pilgrimage site and magnetic energy center.
– Buddhist offices of Khamariin khiid in the morning
– mountain Khar uul = black, sacred (which fulfills the vows)
– center of magnetic and spiritual energy, and pilgrimage site of Shambala
– Meditation caves, sakura tree
– bones of surrounding dinosaurs (considered sacred because “dragon bones”), fossilized wood Or the throat of the vultures; Yol, known for its ice-creams at the bottom of a canyon until recently, remains with or without ice a very nice excursion. Walking in the throat of an unusual freshness in these arid corners, one can raise your eyes and observing the walls observe all the life that drains this unexpected water: mouflons, ibexes and of course birds of prey and scavenger, whose famous bearded vultures that give their names to this gorge. 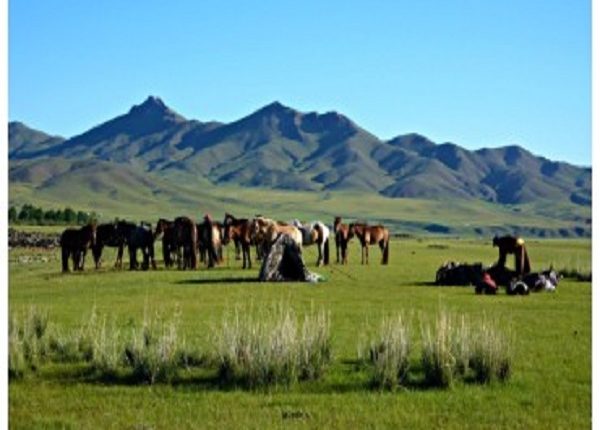 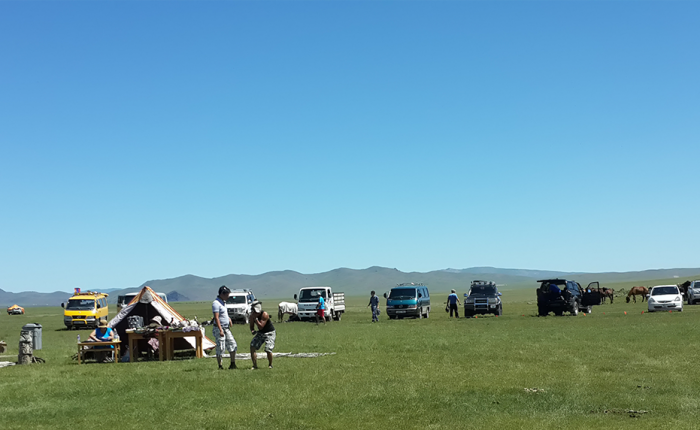 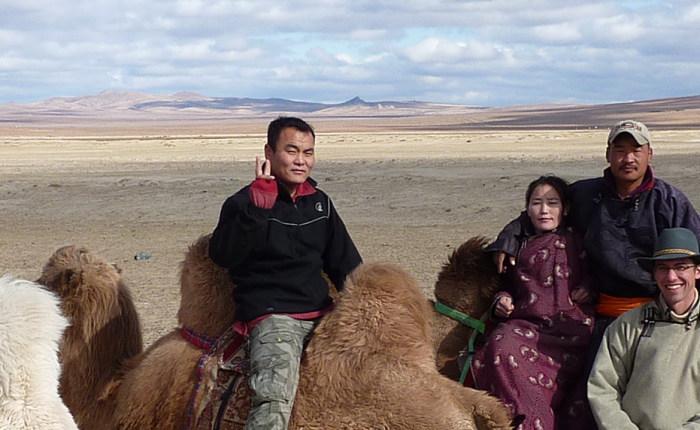 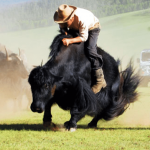 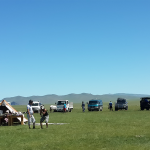 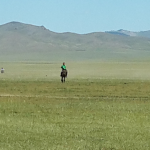 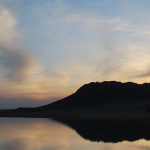